Skip to content
Search
Close
Known by many names, the tower on Patterson Boulevard in Kettering near Hills and Dales Park has been the source of many legends and stories over the years.

There have been many theories and not much known information about the tower. Even the name of the tower has been debated. Some of the names heard over the years are:

The theories of its origin and hauntings vary as much as its name. Growing up in Kettering, we have heard many rumors of the tower and its past. One interesting (and far-fetched) story was that the tower was built during the Civil War, and that a woman climbed to the top and plunged to her death after hearing the news of her husband’s death. The most popular story circulating was one of teenagers seeking shelter from the storm, and lightning hitting the tower, killing them all.

The inside steps of the tower. To protect the innocent, we did not take this picture, but Dayton Unknown has been given the rights to the photo.

So what is the truth? Dayton Unknown did research! We found articles to verify that there was in fact one death in the tower, Peggy Harmeson.

On May 17, 1967, Peggy and her boyfriend sought shelter in the tower from the rain. Lightning struck the tower, killing 16-year-old Peggy and rendering her boyfriend unconscious. This is the only verified death in and around this tower. 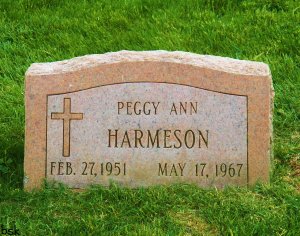 The building of the tower is straight-forward. Construction on the Hills and Dales Lookout Tower started in 1940 by the boys of the National Youth Administration. The tower was made from the salvaged stone of condemned buildings in the Dayton area. The year-long project resulted in a tower which was 56 feet high (before the roof came off) and has walls 3 feet thick.

This article appeared in the February 16th, 1941 Dayton Journal-Herald.

Although the true story of the tower isn’t scary or sensational, teenagers will still probably continue to drive past it at night, in hopes of seeing something beyond this world.

Spotted by Sara on the base of the foundation.

39 thoughts on “Hills and Dales Lookout Tower: The REAL Story”

What do you think? Cancel reply